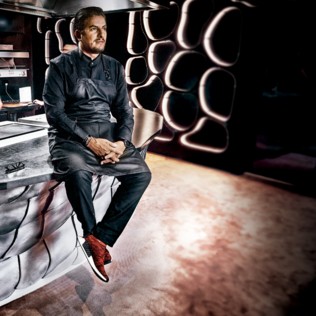 To Akrame Benallal, cooking is a matter of feelings, but also of effort and will. Born in France and raised in Oran (Algeria), from his childhood in the Maghreb, he still remembers the tomatoes his mother used to cook. Back in the Hexagon and once he had discovered his culinary vocation, our young apprentice chef traveled the 25 kilometers that separated his house from the restaurant in Molineuf (Loir-et-Cher) every day, where he began his cooking career.

In 2004 and with hardly any experience, he requested a stage at El Bulli by e-mail. "I learned a lot, but not about cooking," he remembers now. Then came his work with Pierre Gagnaire or a residency at the DOM of Sao Paulo under the orders of Alex Atala, whose chef's touch, devoted and framed, now presides over the kitchen of Akrame, his gastronomic restaurant (2 Michelin stars) in the elegant 16ème arrondissement in Paris.

"Trying to make the ephemeral unforgettable" is the motto that opens the menu of this secluded establishment, located in an old Guy Savoy bistro, two steps from the Arc de Triomphe. Rue de Lauriston should perhaps change its name to Benallal Street, given that our protagonist has been opening different eateries there in recent years - highlighting the carnivore Atelier Vivanda - as its flagship was turning away customers on a daily basis.

It has been a meteoric career for this restaurateur, who debuted as an entrepreneur in 2005, founding L'Atelier d'Akrame in the city of Tours (Loire) and 6 years later, was proclaimed Grands de Demain by the magazine Gault et Millau. Opened shortly afterward on the right bank of Paris, it has been nothing but success since then, even daring to open a branch in China (Akrame Hong Kong, earning a Michelin star a year after it was inaugurated).

What's all the fuss about?

All of Paris has surrendered to this recipe of minimalist, colorful, eminently modern and traveling cuisine. And Akrame, through his charisma and talent, has joined the list of creators who are bringing back to French gastronomy the laurels of yesteryear.