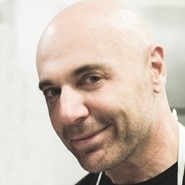 For those who know his cuisine, Germán is the cult chef who always ensures there is a surprise in a dish. The warm taste of bread made with yerba mate, a frisson of excitement when served quail stuffed with humita [corn purée] and apricots.

For the uninitiated diner, he is the bald, blue-eyed guy who prepares complicated menus and is a ruthless judge on a TV show.

But for Martitegui himself, he is simply a cook by trade.

A trade – something not learned at any school – and a search for perfection define the outline of his restaurants.

From his first eatery called Olsen – a restaurant of Nordic inspiration that dazzled Buenos Aires with its stripped-back look and its thousand types of vodka – to the very personal Tegui, a second home where the kitchen brigade is his second family, his professional path has been drawn with tenacity, audacity and seamless training: He studied under the master of masters Beatriz Chomnalez; worked as a chef at Patagonia, one of the restaurants belonging to the great Francis Mallmann; gained experience in the USA, England and France where he learned culinary techniques, and became well known for being for grumpy.

The drive behind his vocation can be traced to his childhood in Necochea. It was there where he discovered that the intimacy of the kitchen offered him a refuge where he could play and explore, unfettered, endlessly and without watching the time. Germán wiled away the hours by making desserts and strange sweet concoctions. He loved staining his hands with the blackberries he would later turn into cakes. Dipping his finger into a bowl of pastry cream to see how sweet it was. He never misses a detail as it is details that make a cuisine; for Martitegui – who is Basque in name, temperament and palate – eating well is important, and is the best reason for learning to cook.

This 53-year-old is a man of few words, has an intense gaze and a career that includes journeys, projects with colleagues such as Diez Manos, and a brand new initiative called Tierras: This entails travelling to the heart of the country to share kitchens and opinions with other chefs, and personally meeting farmers to see the work that they do.

Germán’s career is impressive, but he likes to say that he is simply devoted to preparing simple, delicious food that is based on seasonality and that has a hallmark of sensitivity. An overly brief summary for a chef who deals with complexities and subtleties with equal thoroughness and sensitivity. His restaurant, Tegui – ranked number 1 in Argentina and 11th on the list of the 50 Best Latam restaurants – has an open kitchen where captivating aromas can be appreciated in an atmosphere that is pristine and organised. There, his talent skilfully meets the natural tension that exists between the purity of the produce and its refined treatment.

Germán unexpectedly became a TV star thanks to his participation as a judge on MasterChef and MasterChef Junior. He learned to relish his success but he gets more delight from this important moment that our gastronomy, and that of all Latin America, is enjoying. He does not rest on his laurels but neither do they keep him awake. Nothing drives him as much as the freedom that impels him to ignore boundaries and discover new creative landscapes, just like a musician on the prowl for new melodies.

Martitegui walks along an enormous path. There is still something he is searching for.