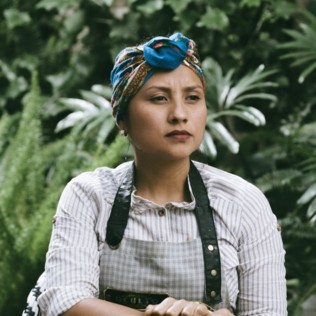 Colombian chef Jennifer Rodríguez is the owner of Mestizo Cocina de Origen, a restaurant located in Mesitas del Colegio, a town 50 kilometers away from Bogotá, Cundinamarca. As a child, at her grandmother Virginia's restaurant, she dreamed of owning her own business someday. Despite growing up among pots and pans, her future seemed to be more linked to starting a technology career in electronics, a program that he began to study at a university in Bogotá. But Jennifer felt better when she was surrounded by tree tomatoes, pear squash, cocoyam, cassava, pachuno beans, arrow leaf elephant ear or American taro, mandarin lemons, mango, guava or cherimoya. And she changed the course of her life guided by a simple philosophy: passion for her land. Traditional techniques and local products to rebuild and work in favor of the local cuisine, always highlighting the ingredients and recipes that remain hidden in Colombian stoves and kitchens.

As the winner of the Latin American reality show 'Cocineros al límite', of the Utilísima channel, and the National Award for Traditional Colombian Cuisine; she also hosted the Fox Life program '3 minutos', together with renowned Mexican chef Antonio de Livier, serving as his sous chef at the Wine and Food Festival in Cancun. In Mexico, she also worked with chefs Alex Ruiz and Manuel Baños in the restaurants Casa Oaxaca and Pitiona.

She has been a gastronomic lecturer at the Universidad de la Sabana and Unitec, a gastronomic judge in the contest 'Colombia cocina su historia' [Colombia cooks its history], as well as an organizer of the Sazonar Bazar Gastronómico festival, which pays tribute to traditions and local products. Her respect for local produce has earned her the La Barra 2016 award in the Revelation Chef category and in 2019 as Best Restaurant of Colombian Cuisine. Ambassador of the new Colombian cuisine, she is the creator of the gastronomic experience of Mestizo Cocina de Origen, which has become one of the most influential restaurants in Colombia.