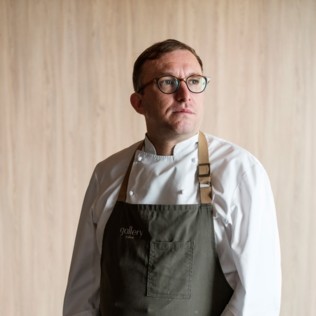 Originally from Torrelavega, Spain, J. Luis “Chele” Gonzalez found an affinity for cooking at a very early age. After receiving a culinary degree from Arxanda, Bilbao, he went on to work in some of the world’s most respected restaurants, including Andra Mari, Arzak, El Bulli, El Celler de Can Roca, Nerua-Guggenheim, and Mugaritz where he developed his culinary philosophy. In 2011, he moved to the Philippines, where he became chef de cuisine at Fever at Sofitel Philippine Plaza, cooking modern European dishes.

In 2013, news broke out that Chele, along with architect Carlo Calma, opened a new restaurant called Vask in Fort Bonifacio, Taguig. It was here where Chele was finally beginning to become himself. It’s safe to say that Chele became most himself—and what he is today—a few months later when he opened Gallery Vask, next door to Vask. The 25-seater restaurant was conceptualized to be a place where fine dining and art can come together. But not fine dining in the sense of formal wear and fine china. At Gallery Vask, it’s not just any other multi-course degustation. Rather the entire meal—actually if you want to break it down, each course—is an experience with a story to tell.

The best part is for both Filipinos and visitors to the Philippines, Chele really painstakingly traveled around the country—even to the most remote places—in search for the best local ingredients from the heirloom rice in the Cordilleras to the alibangbang leaves often used by the Aetas as a souring agent for sinigang.

Engaging with the farmers and local communities allowed him to develop a careful awareness on how to use these local ingredients. These, plus applying the innovative techniques he learned in Spain allowed him to create his own signature dishes and brand of cuisine. “Our journey has led us to work with local farmers and fishermen. We use fresh, indigenous products while honoring their true nature,” he says.

He describes his cuisine as Anthropological-- "where history, culture and traditions are translated into flavors wherein we create our own language." With each new destination and discovery, Chele underscores the importance of their cultural and historical backgrounds by creating tribute dishes on his menu at Gallery Vask. The menu changes seasonally, and is conceptualized to take diners on a sensorial, interactive journey—from the open kitchen to the dining table.

Gallery Vask, evolved into Gallery by Chele in 2018, is constantly evolving—a curated art space that’s become a venue where guests can discover, dream and explore limitless concepts inspired by Philippine art, architecture and culture through the experience of food.

To date, Chele has collaborated with Mugaritz, Arzak, Gaggan and Annua cook in his Gallery Vask kitchen, and has been recognized by World’s 50 Best Restaurants as the only restaurant from the Philippines on the Diner's ClubWorld’s 50 Best Discovery Series for Southeast Asia and Australasia.

Chele is Spanish by blood and Filipino at heart. He is, in a way, a parallelism of how the Philippines’ 300-year relationship with Spain has evolved over the years.