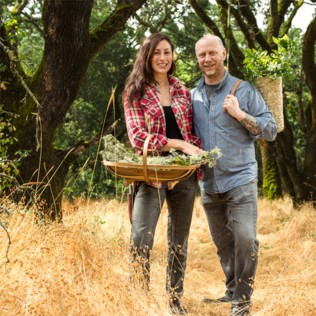 Let’s begin with the farm: The Single Thread Farm lies along the Russian River, in Sonoma, and is located about eight kilometres from Single Thread – Kyle and Katina Connaughton’s inn and restaurant in San Francisco. There, Katina and her team manage a property consisting of a greenhouse, chicken coops, an heirloom fruit orchard, olive trees, beehives, and a cattle paddock all surrounded by vineyards. The farm supplies vegetables, fruit, herbs, flowers, honey, eggs, and olive oil to the restaurant’s kitchen.

Katina began her first foray into farming while living in a rural agricultural community in Hokkaido, Japan. She continued culinary gardening on a Victorian estate property in England before returning to California to complete her coursework in Sustainable Agriculture and Horticulture.

Japan and the United Kingdom, the first same steps that marked the way for Kyle; the man who has been Katina’s partner in life and work for many years.

Kyle Connaughton began his culinary career in Los Angeles with an apprenticeship at one of the oldest Japanese restaurants in the city, then continued training in other kitchens, such as at Spago, in Beverly Hills, The Dining Room at the Ritz Carlton, and A.O.C. A big change came when he moved to Japan as part of the team that opened the Michel Bras restaurant, Hokkaido. In 2006, after a number of years there, he ended that stage to go to the United Kingdom and become the Head Chef of Research and Development for Heston Blumenthal’s restaurant, Fat Duck, before packing his bags and returning to the United States to set up, together with Katina, their shared life and professional project.

Single Thread is the result of accumulated experience and the dreams they have both nourished. A restaurant inn where a particularly Japanese idea of comfort has been imbued into every detail, especially in the donabe bowls made of porous, fossil-rich clay, always made for them by the Nagatani family which has been making traditional pottery in Iga, Japan, for eight generations.

The food they offer is a North American naturalist cuisine with a markedly Japanese feel; exacting in every detail of service, selective in its search for ingredients that borders on the impossible, with creations that are precise and presentations that are colourful and original.

Kyle and Katina Connaughton have conceived and built a place in San Francisco that goes far beyond the actual concept of a restaurant: it is a space able to convey the most exquisite ideas of sustainable, contemporary luxury.