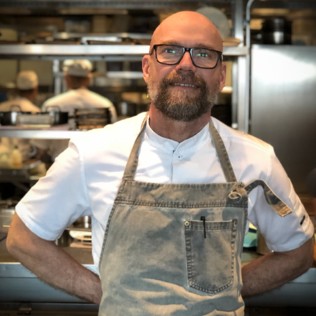 Located in a decaying shipyard in Djurgarden island, south west of Stockholm, the islet that gives its name to the restaurant, Oaxen Krog is isolated from the rest of the world, located on the other side of a channel which can only be reached by Ferry, lying all on its own in a sparsely populated, verdant landscape, surrounded by the cold waters of the Baltic Sea. “It is a restaurant of the archipelago”, says Magnus Ek, one of today’s most remarkable Scandinavian chefs.

After being repeatedly acknowledged as the best Swedish chef, Ek continues to follow a regular line of work, free from ups and downs, opening just a couple of months a year —from May to September— and always following the same modus operandi: his way of cooking must be the means to express the landscape that nourishes it. And based on this belief he creates his dishes as a sort of translation of the secret language spoken by the flowers, herbs, fish and meat which surround him into the universal language of taste and aromas.

We could trace some of the keys which explain his job to the kitchens of other representatives of that same culinary trend he is into: pure flavours, minimum preparation, respect for and updating of the culinary traditions of Northern countries … Although with regards to culinary discourse, where some other chefs radicalize it, he for his part qualifies it, searching for both elegance and naturalism.

Ek studies our perception in order to stimulate it by means of the main resources: acidity, an indispensable resource to both refresh and sharpen the sensations we can feel with the dish and games with aromas and fragrances exuded by every dish. The nose is the most sensitive organ of our perception system and smell is the sense which most deeply penetrates our taste memory. Ek knows it all too well and so makes us of smell as one of his working tools.

The result is reflected in his thrilling dishes which attract the diner due to their vitalistic presentation, recollecting the aromas of their magical surroundings and transferring them to the table in accordance with the season of the year —all the flowers which grow at the edge of the paths, the wild berries which shake in the bushes with every gust, the herbs which doze off at the shore of the swamps— to surprise us with their fragrances from the table.

The pure flavours and aromas of each and every ingredient of this amazing mosaic of freshness and vitality turn the dish into a meeting point: in which we can encounter the magical landscape which makes this restaurant one of the world’s best located establishments; the Nordic culinary tradition; the amazing Swedish raw materials; techniques such as the pickling with aromatic herbs which turn the dish into something completely enthralling; a meeting point with both the sea and the fruits of the land taken to the heights of purity through the technical mastery of a chef which allows him to offer to the diner a culinary experience as distinctive as the landscapes of the small island in which this culinary experience starts and ends: Oaxen.

Esse est percipi (to be is to be perceived) said Samuel Beckett. The great merit Ek has achieved is not the restaurant’s privileged location, his capacity to assume as his own a culinary trend full of vitalism or his technical mastery. The great merit of his cooking lies in his allowing us to perceive the greatness that surrounds him in every single dish he serves.