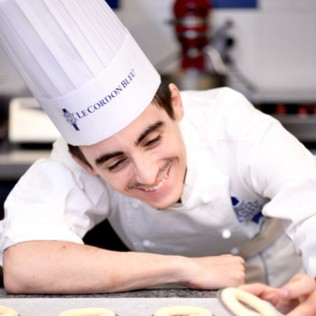 Ducout decided to start his training as a pastry chef at the age of fourteen and has steadily grown as a professional chef since then. With extensive training and international experience, he has found in the universe of sweets a way to satisfy three of his great passions: Namely, traveling and getting to know different cultures, sharing his knowledge through teaching and confronting his knowledge and skills with other pastry professionals by participating in international competitions and contests. His extensive experience includes his term at the Hotel du Palais in Biarritz, France, between 2008 and 2010; his role as a pastry chef in charge of Trianon Palace in Versailles between 2010 and 2011; and his term at the Gran Escuela del Chocolate Valrhona, where he was an assistant instructor between 2011 and 2013. There, he finished the first stage of his career in France. He was still a very young pastry chef who wanted to see the world, so in 2013 he packed his bags and went to Montreal, Canada, to work as sous chef at the Maison Christian Faure and, shortly afterwards, as a pastry chef at the Patrice pastry shop. That's when he heard the call coming from Asia and the opportunity to travel to Tokyo as part of the bakery team of Alain Ducasse's Beige restaurant. He stayed there for one season, until he received an offer to join the team at Glaciel, one of the most avant-garde bakeries in the Japanese capital, where he worked for a while before deciding to return to Europe to settle in Madrid, where he works as a pastry chef teaching at the Cordon Bleu School.