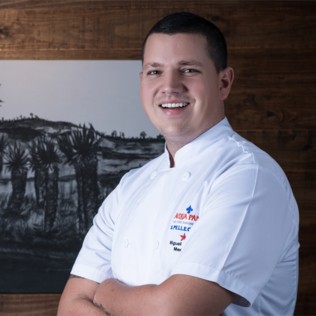 From Medellín in Colombia, Miguel Warren (24) cut his teeth at the renowned Basque Culinary Center in San Sebastián, Spain. As soon as he finished studying, he returned to his home country to set up a business. He had a clear idea in mind. The result was the restaurant Barcal, which he opened in 2016. His haute-cuisine Colombian menu draws from, and showcases, the wide-ranging diversity of the country, offering an in-depth experience of the enormity of Colombia’s potential – the second most biodiverse country in the world. Warren’s work is all about ideas, commitment, mastery of techniques, sensitivity and common sense; attributes that are exemplified in the twelve-dish tasting menu currently on offer:

This includes creations such as beetroot with pipián (an Andean dough, specifically from Popayán, made from red potatoes, peanuts and hogao sauce); almojabana (traditional rolls from the mountains of Antioquia); fish – artisanally caught by Colombian fishermen along the Pacific coast – cured in salt and lime zest, with coconut milk and manioc; crispy fish with artisanal banana vinegar from the savannas of Colombia’s Caribbean coast; smoked aubergines and a traditional coconut stew, distilled panela and corozo fruit from the coast; cacao + cacao; or kumis from Patía, pumpkin and watermelon, a dessert based on the typical kumis dairy dessert from Fosa del Patía.

The Colombian feel of the menu extends to pairings with beverages that are first and foremost from within the country’s borders. Dishes on the menu are paired with drinks like: peanut horchata; yellow corn and panela chicha; traditional kombucha; tomato water; fermented Andean blueberry; Colombian Indian pale ales; or tomaseca.

Warren’s cuisine, which clearly has gastronomic research at its heart, takes diners on a journey through Colombia’s eco-regions whose identities are shaped by their cultures, terrains and produce. This task has led the chef to travel to the remotest parts of the country, seeking out produce, farmers, fishermen and bearers of tradition to ensure that only the freshest produce, not to mention the best ideas for new dishes, end up on his tables. The assiduous work and travel involved have allowed this chef to understand the cultural and social impact that each product has on its people; information that is truly invaluable for the creative process of designing Barcal’s menu.

Currently working on enhancing stronger ties with the people who supply the restaurant, Barcal’s philosophy is fully aware that this movement is not a trend but is the only way to obtain good produce. Warren dreams of a Colombian cuisine that is discerning, flavoursome, responsible and interesting, and believes that diversity is the best tool for awakening the talent of any cook.