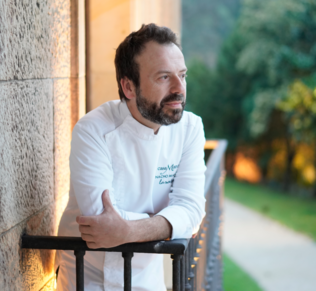 Nacho Manzano knew he wanted to be a cook when he was just knee-high to a grasshopper. So, no one at home was surprised when, at the age of thirteen, he substituted his mother one day in the kitchen of the family restaurant as she was unwell, cooking a meal that they had committed themselves to. Nacho thus began a career that – after a few more years of experience and accumulated knowledge from schools and from working in other kitchens – bloomed just when the kitchen at Casa Marcial, a casual family-run eatery, became his.

We then witnessed the emergence of a different Asturian cuisine, one in which creativity made the vastness of Asturian produce, enjoyed in that ancient land, shine like never before. We saw how his personality unfurled through a menu on which produce reigned in dishes that were harmonious, elegant and imaginative in their design, defined by simplicity, but also by the enhanced concentration of their flavours.

The passing of time brought success. Casa Marcial is now the restaurant in Asturias with the most awards. Manzano has expanded his activity to Gijón with the opening of La Salgar; in Oviedo, with La Gloria; and in the United Kingdom, with his Ibérica establishments in London.

Nacho Manzano is today one of Spain’s great chefs and, without a doubt, one of the most well-known internationally. His reach may or may not have surprised us, but it seems that it was already clear that all this would happen when, as we said, he was just knee-high to a grasshopper.