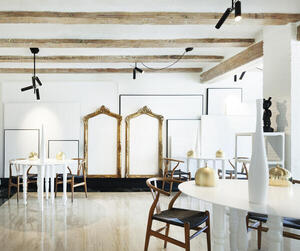 Located in Denia (Valencia), the Quique Dacosta Restaurant has been opening seasonally since 2010. In the months the restaurant is closed, they devote themselves to creativity for the coming year, in addition to attending congresses and work derived from Daco&Co.

The Mediterranean lights play a leading role in the restaurant, which has two rooms with large windows, modern and elegant, with a minimalist touch, in which Dacosta himself decides the scenery for each year's menu (in 2011, he even designed unique tables for it, which he kept after receiving the third Michelin star).