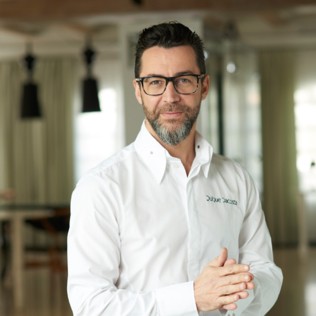 Begin with what is known, familiar and close, to project it to an unheard of, unexpected, truly new place. The starting point, now more than ever, is in the star ingredients of the area of Marina Alta, from the humble, wild raïm de pastor (cat’s claw) to the iconic red shrimp from Denia. It is in this prodigious Mediterranean pantry where origins (the DNA of the region) can be found, while the creative transformation of its produce (octopus, tomatoes, sea urchins, rice, mantis shrimp, almonds, chard, pumpkin, Guirra sheep, etc.) is at the heart of its eloquent evolution. In the end, it is all about delving into its roots, of getting caught up its dark tangle, to emerge from this labyrinth to find a dazzling and unknown sky.

That is the explanation (or how I see it) of the name of the current tasting menu at the Quique Dacosta Restaurante: Evolution and Origin. The salt-cured-food trolley – presented for the first time at the last edition of Madrid Fusión – is a clear example of immersion in a culinary tradition to refine and transform it: marinated cuttlefish pancetta (a delicious marine bacon), and ling-roe torta, just as silky as the sheeps’-milk cheeses from Extremadura (a nod to the chef’s homeland), are two stunning dishes. A bright, new look at something totally typical.

In the prologue of his tasting menu, Quique Dacosta quotes my fondest side of Lorca; the man of talks and short essays, such as that dedicated to the Theory and Play of the Duende. It is where the poet from Granada refers to the trance ‘that smashes styles’ and is only possible when you are able to free yourself from ‘faculties and security’ to reach the heart of emotion. It is duende that allows Nina Simone, Janis Joplin and Pastora Pavón, the Niña de los Peines, to sing so movingly; something that cannot be extrapolated to the world of techno cuisine because it lacks that improvised immediacy of arts that ‘raise their contours above the precise present’.

Even so, a culinary style and its creative process can be imbued with that ‘spirit of the land’ that duende brings, like ‘a mental wind’ that possesses you and steers to you towards ‘new landscapes and unknown accents’. There are many inspired moments on Quique Dacosta’s latest tasting menu; from the ‘sea urchin and tomato appetizer’ to the refreshing ‘white-petal soup’ whose elegant protagonist is the bitter almond. Genius also emerges in the flavoursome ‘red-mullet slices with its liver, pounded mantis shrimp and chard stalks’, and in the surprising ‘stew of pumpkin seeds in burnt butter’, creamy and sweet with hints of liquorice and vanilla.

Lorca’s duende is an enemy of perfectionism, of repetition, of blissful excellence... of ‘the terrible botfly of boredom’. Everything looks too neat, bright and skilful in cook books, in those amazing videos of talks, and in alluring photos on websites, because real cooking does not happen on social networks or in reproductions of any kind, but on the stove, in dishes and on the diner’s table. There, especially there, is where the magic must spring from and concentrate. Everything must be of the moment.