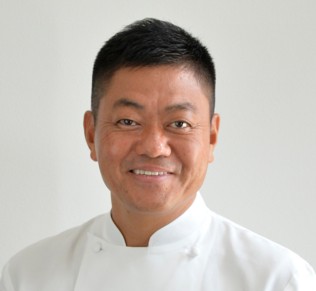 Yoshihiro Narisawa was born in 1969 on the Chita Peninsula, nearly 400 miles from Tokyo. He grew up in a family of chefs and his vocation was decided early on by his immediate surroundings, not only his immediate family but the nature surrounding him. Son of a rural and traditional area, he always recognised with a certain mystical sense the nature that directly provided the ingredients he saw used in cooking. He associated the two concepts in his mind and heart and this association resulted in his naturalist impulse, deeply rooted in traditional Japanese customs.

At nineteen he decided to become a professional chef and travelled to France to work in some of the country’s most prestigious restaurants. There he developed a substantial technical foundation, which served as the basis for his further evolution without limiting it in the least. His cuisine, Narisawa himself insists on it, is deeply personal, in which technical influences from many sources can be noted and are always used to the same end: the purpose of cuisine should be to convey nature on the plate.

Nature at its purest and most essential state. Not as an interpretation, but as a necessary homage and meaning that takes shape in an almost poetic translation of the elements of the landscape into those brilliant dishes on Narisawa’s tasting menu, paraded before the diner.

Gift of the land, gift of the sea, gift of the garden, gift of the forest…the names of his dishes are divided into natural spaces in which each of the seasons comes alive. There is a message perceived in the harmony of time and colours, aromas, light, flavours. Food and the season are the same thing. The dishes only make sense in a specific moment. They are a continuation, a delicious epiphenomenon of the cycle of nature.

We jumped to the present too soon. Let’s go back. Narisawa returned to Japan after his stint in France and opened his first restaurant in Odawara, in the province of Kanawaka. It was there where he began his growing relationship with the producers that daily supply him with fresh raw materials always sourced through sustainable and ethical means. It was there that he made a name for himself in Japan and there that he decided to make the leap to Tokyo to deepen his level of standards. The capital welcomed him in 2003.

He opened what was first called Les Creations de Narisawa (it has since evolved into simply his last name, Narisawa) in Tokyo’s exclusive Minami Aoyama district that same year. There he feels less indebted to his past –that period of European training that marked his beginnings– and more asserted in his philosophy, that sapid exegesis of the seasons that has earned him a place at the top as the best restaurant Asia by critics worldwide.

“We should continue believing in our Japanese conscience and heart that all elements of nature, even the most insignificant, are part of the spirit of the gods. And we have to protect them from the heart. Towards my fellow man I feel the desire to revive and resurrect those natural landscapes which have perhaps been devastated by the hand of humanity”, he says.

“In order to bring nature to the plate and try to offer the specific strength of each season, the dish’s main ingredient must be chosen and its structure developed by other ingredients whose flavour, appearance and texture evoke the current season. The guest should fall under the spell of the season. Not eat a meal. Absorb life”. Enough said.